February 6 is the 131st Birth Anniversary of Khan Abdul Ghaffar Khan, also popularly known as Frontier Gandhi and Badshah Khan. He was a prominent Indian Freedom Fighter, a die-hard opponent of the two-nation theory and the idea of Pakistan. He was totally committed to Gandhi’s idea of non-violence, and enjoyed the same stature in NWFP also known as Frontier as Gandhi had in India. He opposed with full conviction the inclusion of NFWP in Pakistan but failed. After formation of Pakistan he, his followers and his family faced terrible repression at the hands of consecutive Pakistan Government including the one led by Jinnah and Islam-o-fascists. One of his brothers was assassinated, and supporters butchered by islamist fascists, he spent more than a decade in Pakistani jails and then was forced to go into exile in Afghanistan. He was declared to be an agent of Hindu India. ML Government led by Jinnah did not tolerate the NFWP led by Badshah Khan’s elder brother and it was dismissed on August 22, 1947; exactly eight days after the formation of Pakistan.

Whatever ruling classes of Pakistan did to Frontier Gandhi is understandable as he stood as a rock against Islamist politics of declaring Muslims as a separate nation. But what treatment he got and is receiving in India is far more abhorring.

The latest denigration of his took place in last December in India. A hospital constructing in his honour in Faridabad (Haryana) with the help of Hindu-Sikhs who migrated from NWFP, inaugurated by the first PM of India, Jawaharlal Nehru as Badshah Khan hospital was renamed as Atal Bihari Vajpayee hospital![i]

Frontier Gandhi founded the Khudai Khidmatgars (Servants of God) which was at the head of a patriotic and socially progressive movement. The movement was also nicknamed as ‘The Red Shirts’ due to the colour of uniform it used for its cadres. Their presence was first noticed at the Lahore Congress in 1929 which at that time according to police reports numbered 200,000. Quotation from the Quran against slavery served as rallying points for nationalist enthusiasm and the struggle to liberate the country from foreign rule became the Holy War of Khudai Khidmatgars.  A peerless authority on Muslims and Muslim politics in modern India, Wilfred Cantwell Smith was of the opinion that “No section of India has been more thoroughly nationalist.”[ii]

Khan Abdul Ghaffar Khan referring to violence unleashed by the Muslim League goons in the pre-partition India told in July 1947:

“The Muslim Leaguers are daily taking out processions, raising highly objectionable slogans. They call us kafirs (infidels) and resort to abusive language. I have been personally hooted…Another matter which is causing serious concern to us is the presence in our province of a large number of Punjabis who openly incite people to violence. Not only that, but they have also gone to the length of suggesting in public meetings that the top leaders of the Red Shirts should be done away with. They also proclaim openly that after Pakistan has been established…all of them who are called traitors will be hanged.”[iii]

Ataullah Khan nephew of Khan Abdul Ghaffar Khan’s wife, his servant and friends were killed by Muslim Leaguers when former raised objection to some of the utterances in a Muslim League meeting in a mosque at the village of NWF Province.[iv]

“People complain against me for having joined the Congress by selling my nation. The Congress is a national and not a Hindu body. It is a jirgah composed of Hindus, Jews, Sikhs, Parsis and Muslims. The Congress as a body is working against the British. The British nation is the enemy of the Congress and of the Pathans. I have therefore joined it and made common cause with the Congress to get rid of the British.”[v]

Khudai Khidmatgars exhibited the spectacle of liberation theology of Islam. It demanded better distribution of land and decried the large estates.[vi] Khan wanted to build a socialist society.[vii]

Ghaffar Khan was a great secularist.

“It was in Punjab jail that he formed friendship with Hindus and Sikhs and studied the Hindu scriptures, especially the Gita and the Granth Saheb, the Holy Book of the Sikhs.”[viii]

He stood for united India. According to Khan Abdul Ghaffar Khan,

“It is significant to note that while Pathans are intensely freedom-loving and resent any kind of subjugation, most of them are beginning to understand that their freedom can well harmonize with the conception of Indian Freedom, and that is why they have joined hands with the rest of their countrymen in a common struggle, instead of favouring the scheme of breaking up India into many States. They have come to realize that the division of India will result in all-around weakness in the modern world, where no part of it will have sufficient resources and strength to preserve its own freedom.”[ix]

Khan vehemently protested against Congress when in June 1947 agreed to the partition of the country. He told Gandhi in June 1947 after CWC meeting,

“We Pakhtuns stood by you and had undergone great sacrifices to attain freedom. But now you have deserted us and thrown to the wolves. The decision about the Partition and Referendum in the Frontier Province was taken by the High Command (Congress) without consulting us. Sardar Patel and Rajagopalachari were in support of partition and were holding referendum in our province. Sardar said I was worrying over nothing. Maulana Azad was sitting near me. Noticing my dejection he said to me, “you should now join the Muslim League”. It pained to me how little these companions of ours had understood what we had stood for and fought for all these years.”

Forgetting Frontier Gandhi and his struggle is reprehensible for another reason. It means that we are becoming a party to the cover up of one of the worst massacres by the British Army in India; the Qissa Khwani Bazaar Massacre of Peshawar. The British Rulers believed that non-violent Pathans were more dangerous than Violent Pathans. So when ‘Red-Shirts’ sat for a peaceful sit-in at famous Qissa Khwani Bazaar [literal meaning street where stories are told] on April 23, 1930, the protestors were machine-gunned in which according to the British 20 protestors died but according to Nationalist sources more than 400 were martyred. This cover-up also wants us to forget about Veer Chander Singh Garhwali and his fellow soldiers of the Garhwal Regiment of the British Army who refused to fire on the same peaceful Khudai Khidmatgars. They were arrested, court-martialed and were sentenced for life-imprisonment.

The present generation must revisit the life, works, sufferings and sacrifices of Frontier Gandhi and his compatriots to know how shamelessly we have erased our progressive, secular and egalitarian heritage. It is not a small crime, in fact, by doing it we only paved the way for taking over the Indian polity by the Hindutva counterparts of Islamists of Pakistan.

Also Read: Revisiting the Back-Stabbing of Netaji by Hindutva Gang on his 125th Birth Anniversary 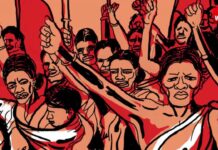 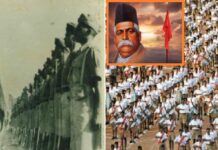