Last weekend, a rainbow coalition of organizations and individuals launched the South Asian People’s Action on Climate Crisis (SAPACC) in Hyderabad. It was attended by more than 300 people from across South Asia.

Over four days, representatives from India, Nepal, Bangladesh, Maldives, and Sri Lanka met to articulate action-oriented demands that could mobilize their respective governments and the United Nations towards taking climate crisis mitigating actions, along with strategies to exert pressure on their implementation. Students, farmers, workers, fisher-persons, adivasis and activists alongside scientists, engineers, teachers among others – who recognize the urgency of demanding collective action at a global level – put forth resolutions and supported a petition demanding an equitable and ecologically sound climate-emergency action plan implemented by the UN.

Estimates by Mr. Tariq Karim, former Bangladesh High Commissioner to India, find that over 50 million Bangladeshi people – roughly 6 times the population of London – will become climate refugees by 2050. By the 21st century, that number will rise; and the country of Maldives will drown, displacing its population of 400 thousand. Significant stress and possible conflict can be anticipated in the near future, considering the extreme weather events, water scarcity and sea level rise that will affect India, Pakistan, Sri Lanka, and Afghanistan. About half of the glacial ice spread across 75,000 km2 of the Himalayas today may be lost, with Bhutan and Nepal experiencing glacial lake outburst floods in 2100.

We are not confronting climate ‘change’, but climate ‘crisis’. According to the Intergovernmental Panel on Climate Change (IPCC), we have till 2050 to cut carbon emissions to zero if the Earth is to remain habitable. Unfortunately, governments have been reluctant to take mitigation measures. Voluntary pledges made in the 2015 inter-governmental Paris Agreement by large emitters, particularly from the North, are inadequate to keep temperature rise below the 1.5 – 2 degree redline. Additionally, USA has announced its intention to withdraw from the Paris agreement and has not been following its commitments. USA’s reluctance to transition from fossil fuels has influenced countries like France and China too.

As a result, people are mobilizing to pressure their governments. Many international climate campaigns have amassed support, including Extinction Rebellion from the UK and the European children’s School Strike movement, but the reaction in India and South Asia has been slow beyond the urban middle class. Given the urgency of this crisis, in May 2019, a group of scientists and representatives of trade unions and people’s movements in India and South Asia, decided to launch a campaign.

Completely people-funded and focused on addressing the vulnerability of South Asian countries due to climate change, SAPACC’s meeting marks the first of its kind in South Asia. Despite housing a quarter of the world’s population, South Asia has emitted only 3.5% of the world’s historic emissions since the Industrial Revolution. And yet, it will be among the worst affected regions. The Global Climate Change Risk Index, 2019 reported that as of 2017, Sri Lanka, Nepal, and Bangladesh were in the top ten countries most affected by climate change impacts.

Given the inequality of climate risk and impacts, South Asian civil society organizations are demanding action at a crucial time. “Learning good strategy through the context of different countries is vital to combat climate change. Exchange of knowledge and experiences provides solidarity and support across borders”, said Deekshya Illangasinghe from South Asians for Human Rights, based in Colombo, after chairing a session on SAPACC’s core demands. South Asia will be one of the hardest-hit regions in the world, with specific populations most at risk, so SAPACC also included focused group discussions on impacts of this crisis with fish workers, farmers, women, youth and workers.

These experiences of people who directly feel the fingerprints of human action on the climate emphasize that no country can tackle the crisis on its own. Young people from across the world are raising their voices against inheriting a socio-ecologically unjust future. However, voices of the most vulnerable are still marginalized in the narrative on climate crisis impacts. While keeping these voices at the forefront, SAPACC aims to influence public policy on the crisis in South Asia and mobilize mass action to mitigate it. It will keep this momentum alive by forming a coordinating body to take the action forward in a collective manner on the South Asian level. Members will be writing to their respective governments to declare a climate crisis, and act on it in a timely and proportionate manner. Extend solidarity to keep the climate and change the economy. As a people’s coalition, we must keep this fight alive.

Tamilnadu: 23 year old hacked to death in the name of...

A ‘Million March’ in the heart of Hyderabad against citizenship Amendment... 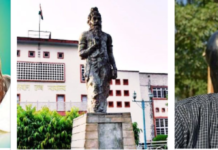