French President Emmanuel Macron can’t stop talking about his desire to include climate change goals in the country’s constitution while simultaneously supporting French Oil Giant Total’s East African Crude Oil Pipeline notoriously known for its ecocide and human rights violation. This dangerous hypocrisy if ignored can have consequences for local East African communities and the environment.

‘We cannot drink oil. This is why we cannot accept the construction of the East African Crude oil pipeline,’ Vanessa Nakate, a Ugandan activist said explaining the ongoing protests in several African countries along against the French energy giant Total, africanews reported.

Today is #TotalAGM 🚨 France’s climate killer aims to build the EACOP pipeline, drilling in Uganda's Murchinson Falls Park, displacing thousands of citizens and risking the chances for #1Point5 🔥@EmmanuelMacron & @PPouyanne is this what climate leadership looks like? #StopEACOP! pic.twitter.com/y5f0mWV62y

Total is the main proponent of many controversial projects across the continent, notably the East African Crude Oil Pipeline (EACOP) and the Mozambique Liquified Natural Gas (LNG) project, and has been accused by environmental and climate activists and local communities in the East African nations of human rights violations, greenwashing strategies, and climate inaction.

At present, the company has withdrawn all its staff and put an indefinite halt on its  LNG project in northern Mozambique due to potential security threats weeks after several attacks were carried out by religious militant outfits in nearby areas.

However, Total which will gain the maximum profit along with other corporations is still continuing with its plans to construct the massive East African Crude Oil Pipeline to extract oil from Uganda and export it as part of transnational trade.

The #StopEACOP Campaign is run by an alliance of over 260 civil society organizations to stop the construction of the pipeline through public mobilization, legal actions, research, shareholder activism, and media advocacy.

"The project being described as a ‘world-class' project is really a catastrophic one" @ninteretse from @350Africa explains on @AJStream about the East African Crude Oil Pipeline. You can watch the episode here https://t.co/DCsQndJU5D pic.twitter.com/7bPtxMJuWE

EACOP threatens the water resources lands on which the livelihoods of millions of people in Uganda and Tanzania through farming and cattle rearing are dependent. The local communities also are at the risk of displacement which has already started and faced resistance from local landowners in the absence of a transparent process and proper compensation.

Both the construction and operation of the pipeline pose a severe threat to wildlife habitats and corridors home to a number of iconic and endangered animals, such as lions, African chimpanzees, and elephants. The pipeline if built will burn six billion barrels of oil and generate over 34 million extra tons of carbon emissions each year which will contribute massively to global carbon pollution.

Earlier in the year, the alliance had sent an open letter to 25 banks urging them not to finance the construction of the EACOP. Subsequently, Total issued statements on its website saying its socio-environment policies for EACOP were “rigorous” and claiming to act “responsibly and transparently” which the rights group refuted.

Following pressure from the #StopEACOP campaign, the African Development Bank along with Barclays and Credit Suisse announced that they will not finance EACOP. The campaign is now focused on convincing the directors, shareholders, and other stakeholders backing EACOP to end their association with the project.

Despite the dangers of harassment, threats, and even arrests on dubious charges local groups, and communities continue to oppose the project publically.

Legal Petitions Against Total in France

In April 2021, Total, along with the China National Offshore Oil Corporation and the Ugandan and Tanzanian national oil companies has signed the deal for the construction of EACOP amidst severe public and legal opposition by rights groups in France and Africa.

The signing happened after judges in French Supreme Court ruled in favour of Total, confirming the judgment of the first instance court which considered that this dispute fell within the jurisdiction of the commercial court.

Earlier when climate change groups like Survie, Friends of Earth, France, etc, took the company to court in 2019 for its failure to elaborate and implement its human rights and environmental vigilance plan in Uganda, the court had said that the matter could be heard only by a commercial court. The case was the first-ever legal action of its kind – seeking emergency proceedings against Total for non-compliance with its legal obligations under the 2017 French duty of vigilance law, which aims to address corporate negligence.

The groups went to court after Total rejected the formal demand sent by six NGOs asking it to revise its vigilance plan and its implementation in EACOP.

‘It’s time for journalism to recognize that the climate emergency is here,’ a statement released in April 2021 by Covering Climate Now, a global journalism initiative with more than 400 media partners emphasised.

For a minute think about the increase in the frequency of wildfires, heatwaves, and record-setting cold all across the world amongst other manifestations of climate change that threaten to make Earth inhabitable. While the States and Corporates globally continue to underplay the gravity of climate change as a result of their profit-driven commodity production and overuse of natural resources (the list doesn’t end here!), while the world continues to witness unprecedented environmental changes.

Calling all of this an emergency, doesn’t seem like fantasy then, does it?

Read More: Climate change: what G7 leaders could have said – but didn’t

International Day of Democracy Amidst The Decline of Democratic Pillars 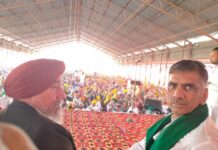 Climate change: what G7 leaders could have said – but didn’t