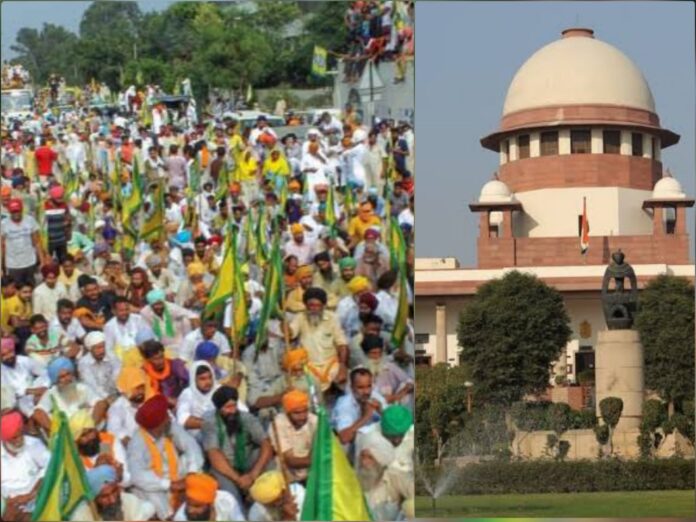 Hindu Dharma Parishad has demanded the Supreme Court issue directions to enforce Farmers Act to Centre and States. In October, the organisation submitted a plea in the supreme court demanding that the court put a blanket ban on all kinds of protests by various political parties and organisations against the Farmers (Empowerment and Protection) Agreement on Price Assurance and Farm Services Act, 2020 in no. 20 of 2020 and the Farmers Produce Trade and Commerce (Promotion and facilitation) Act, 2020 no.21 of 2020.

With the same context, the plea further seeks to ban the electronic telecommunications, internet, Facebook, Whatsapp, Telegram, posters, flex banner, or any other electronic transfer communication regarding any statement or videos of Farmers Acts’ which are propagating throughout India either supporting the Act or rejecting its implementation. The plea has also claimed that the Farmers Acts are pro-farmer and should be enacted for the benefit of agriculture.

Read more- Why are farmers opposing the new agriculture bills?

The Supreme Court on Tuesday dismissed the PIL stating-

“You cannot ask for a general direction to implement the Act. You have to bring forth specific cases”, observed the Chief Justice of India, S A Bobde, while dismissing the PIL.

The bench also issued a notice on two other petitions which challenged the constitutionality of the three laws: – Farmers (Empowerment and Protection) Agreement on Price Assurance and Farm Services Act, 2020 Farmers Produce Trade and Commerce (Promotion and facilitation) Act, 2020 and Essential Commodities (Amendment) Act 2020.

Those petitions were filed by D K Dhakkad, a Madhya Pradesh-based farmer and Bharatiya Kisan Party.

Senior Advocate Vivek Thankha, appearing for Dhakkad, submitted that the farmers’ laws were in conflict with the Madhya Pradesh laws on Agriculture Produce Marketing Committees.

These ordinances have been introduced in the parliament in spite of nation-wide protests by farmers, strong opposition in the parliament, and notably the resignation of Union Minister Harsimrat Kaul Badal of the Shiromani Akali Dal, a long-standing ally of the BJP.

The ordinances and now the Agriculture bills have been criticised for being anti-farmer and pro-agricultural business. Farmers have raised the issue of the lack of guarantee of MSP, the destruction of the mandi ecosystem, the disadvantage of the small and marginal farmer in an open-market, exploitation under contract farming, and the issue of hoarding.