Bhartiya Janta party’s (BJP) agenda to saffronise the educational institutions and its affinity for disseminating propaganda is not a secret. From the appointment of VC’s favourable to the BJP regime to pushing Hindutva agenda in NCERT books or removing sections that are unfavourable to BJP from the syllabus is all too common.

Recently a strange and curious case of Rajasthan Governer Kalraj Mishra has come to light.

Mishra’s autobiography titled ‘Nimitt Maatra Hoon Main (I am just a medium) was launched on July 1. The launch ceremony which was attended by the Rajasthan Chief Minister Ashok Gehlot, Lok Sabha speaker Om Birla and the Vice Chancellors of all 27 state universities was organised at Raj Bhawan, the official residence of the Governor.

Mishra sent 19 hard bound copies of the book along with bill of Rs. 68,000 to the drivers of other universities Vice Chancellors who had attended the programme. This has left the VC’s perplexed.

Its a normal practice to send newly published books to your well wishers. But sending copies of the book along with a humungous bill would be the first and one of its kind incident. This kind of arm twisting where other University VC’s are used to distribute books, spread the propaganda but also to foot the bill for the books they never asked for.

The bill amount is to be paid to the bank account of the International Institute of Management and Entrepreneurship (IIME), Jaipur. IIME defines itself as ‘an autonomous body and non-profit organisation,’ however, the point of attention is that the co-author of the biography Dr. D K Tanket, and his partner Sujata Tanket are both associated with IIME.

‘The rules for procurement are clearly laid out in the Rajasthan Transparency in Public Procurement (RTPP) Act, 2012. How can universities be loaded with these books in such a unilateral manner? The state’s 27 universities specialise in fields such as technical, health, agriculture, veterinary, law, etc. Why does each university have to foot the bill for so many books, and under what head will we bear the expenses?” a V-C asked, The Indian Express reported.

The book has also come under scanner due to the sections that have been devoted in praise of RSS and Hindutva ideology. The book’s foreword has been written by PM Narendra Modi and with its high praise of RSS and BJP.

Some people have also questioned if an incumbent governor can promote the agenda of a particular political party.

‘Let’s support the movement to build a NEW INDIA. Join the party and strengthen our hands in this mission. EK BHARAT, SHRESHTHA BHARAT,’ says a poster that has been included in the book, TOI reported.

Read More: Books on Yogi, Ramdev and Jaggi Vasudev to be taught in Meerut University 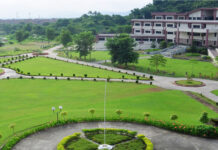 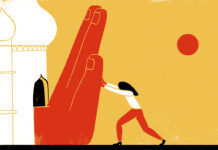