Today, civil society who are fighting for democracy has called for a massive protest in Bangalore, demanding the immediate release of journalist, activist and Swaraj India party State Secretary Doddipalya Narasimhamurthy.
A protest march will be held in front of the Gandhi statue near Maurya Circle, Bangalore today at 3 pm. Hundreds of civil society members have expressed outrage over the ruling party’s repressive tendency again and again and the latest illegal arrest of journalist and social activist Doddipalya Narasimhamurthy, who is also the secretary of Gowri Media Trust.
Hundreds of people have opposed the arrest of Narasimha Murthy on social media with Hashtag #We_are_with_DMNMurthy #We_are_with_Peoples_Media, and announced that they will take part in today’s protest.

We condemn the malicious arrest of Doddipalya Narasimhamurthy. We will not tolerate tyranny against the people-centric media, and if you are with the people-centric media we will add your name in the post and it is important we are all in this together says the FB post. More than one thousand people have expressed their support for the fight, according to a Facebook post. 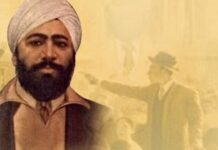