The Karnataka High Court has issued notice to the central government regarding the privatization of Mangalore International Airport. The Central Government has leased three airports including Mangalore Airport to Adani Enterprises Limited Groups.

Mangalore Airport Authority Employees Union had filed a public interest petition in the High Court seeking to squash this decision taken by Parliament in 2019. Following the hearing of this petition a divisional bench of Chief Justice Abhay Srinivas Oka and Justice Sachin Shankar Magadam has sent a notice to the centre.

Also read: Three new airports to be handed over to Adani Group

The Union Cabinet on November 8, 2018, in principle approved the proposal to run six airports in public partnership.

The petitioner requested the court to declare that the bidding process for privatization was illegal, arbitrary and beyond the scope of the Airport Authority Act. The central government had earlier decided to hand over Twelve airports to the private sector. Adani had an agreement with the company in February 2020. According to the government, Adani Group won the highest bid in the tender process for the privatization of six airports in the first phase.

First published in naanugauri.com and translated by Yogesh S 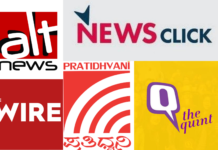 Private Companies Can Set Their Own Train Fares With No Limits