Kannadigas celebrated the birthday of beloved “Rashtra Kavi” Kuvempu by embracing his writings and principle of universal togetherness.

Many citizen groups gave a call for “Sahasra Sahabhojana” all over karnataka on Kuvempu´s birthday. Sahasra Sahabhojana or Thousand gatherings with sharing of food together was celebrated with music, poetry and spoken words of famous Indian poets and writers.

People also read the Preamble of the Indian constitution to remind ourselves of the democratic, secural and pruralistic foundation of our country.

The tagline of the event was- “Peaceful garden of universal togetherness” because this is how Kuvempu eulogized Karnataka in the state anthem- as a peaceful garden of all humankind , irrespective of caste, creed and religion.

The organisers of the event in speaking with Gauri Lankesh news said- The event is to promote peaceful coexistence and social harmony in the country. It is to send a message of love and togetherness as a response to attempts made by certain forces to divide the country into religious lines.

The event recieved tremendous response with people gathering from different walks of life to be part of a gathering of like minded individuals promoting communal harmony. People brought food, music and poems. They collectively read the preamble of the constitution and vowed to maintain peace.

Many across the state have organized, participated and celebrated the event with great gusto emphasizing the unity of India lies with its diversity on the birth anniversary of Kannada poet Kuvempu. People celebrated the idea of united India against all odds with much joy and gusto.

The event took at many places in Bangalore. The event at Cubbon park was attended by 200 citizens including Ramachandra Guha who was arrested in the recent Anti-NRC-CAB protests.

Events across the districts, towns, villages, and homes from Chikkaballapur, Mandya, Shivamogga, Kalburgi, Hospete, Bagalkote, Gauribidanur, Pavagada, Chikkanayakanahalli, Udupi, Baindooru, Belgaum etc were also reported. The people gathered together denounced the divisive politics  and pledged their support to the secular and socialistic fabric of the Indian constitution which furthers the bond of brotherhood.

Kuvempu, the cultural icon of Karnataka was born on 29th December 1904 in Kuppalli, Shivamogga district, Karnataka. In his poetry and literature, emphasized the shunning of collective social evils such as the caste system, blind beliefs, and religious animosity by encouraging the concept of universal man (Vishwa Manava). He strongly advocated the principles of social justice to achieve peace and harmony in society.

India has a long tradition of tolerant and peaceful co-existence with many sharing the same civilizational exchanges and it our duty to continue and strengthen it. Many attendees remarked in their speeches.- “This event is one of a kind with people uniting for love and peace with food in the time of manufactured hate”.

Protests against the New Food Corporation of India Guidelines

Factory Accidents on the Rise: 130 Workers Have Died 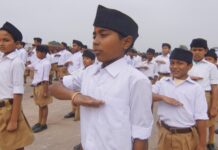