Women are being rendered invisible in news coverage regarding COVID-19 due to a strong bias towards men.

The findings were a result of a project aimed to examine women’s representation in COVID-19 newsgathering and news coverage in India, Kenya, Nigeria, South Africa, the UK, and the US.

The study used various quantitative and qualitative methodologies to arrive at reliable inferences about three indicators of gender equality: women as sources of news expertise, news stories leading with women protagonists, and coverage of gender equality issues. Based on its findings, the report also made recommendations for news providers who want to improve the quality of their COVID-19 reportage in terms of representation of women.

The report was commissioned by the Bill and Melinda Gates Foundation.

Underrepresentation of Women in COVID-19 News

Firstly, women’s voices as experts are extremely sidelined from COVID-19 stories, more so than other stories as well.

In India, men were quoted five times more frequently than women in news about COVID-19, which was the worst out of all the six countries.

In the 175 most highly ranked stories about COVID-19 from the top five providers in each of the six countries, women were four times less likely to feature as experts and commentators than men.

One possible reason for this bias is perhaps that during crises, journalists fall to sources that are well established in an industry, which tend to be men due to the power imbalances in most sectors. This can also be seen from the fact while the men who were quoted were more likely to be experts, commentators, or politicians, the women who were quoted were more likely to be sharing subjective experiences, often as victims. In fact, out of the 175 top stories, only 17% of the protagonists portrayed as empowered, were women.

The underrepresentation of women is also seen in the kind of COVID-19 stories that are most commonly published, most of which are those that centre around hard facts rather than around people. Only 25% of the 175 top stories from the six countries centered around people and only 9% contained an element of a human interest story.

More than 99% of the coverage from across the six countries entirely missed the dimension of gender equality. Even in these stories, men featured more prominently than women.

In India, only 28% of the 25 most frequently featured protagonists in gender equality stories were women. On average women made up only 1/3rd of this number across the six countries.

This underrepresentation of women needs to be seen in the socio-political context of women in the COVID-19 crisis.

First is the exclusion of women from decision-making processes. 100% of the COVID-19 response decision-making group in the UK is made up of men. In India, it is 86%. Other than South Africa, where men make up 50% of the concerned body, men are overrepresented in all the other countries analysed in this report.

Second, is the increased vulnerability of women to health-related challenges.

COVID-19 data from some countries suggests that women may be more likely to be infected with coronavirus than men, and reports from socially conservative countries in Africa and Asia suggest that women may be left out of testing, leading to under-reported data on infections amongst women.

Further, women make up a majority of health professionals globally and are therefore more exposed to the virus. But there was hardly any coverage of nurses dying of  COVID19. In many countries, nursing staff also went on strike to highlight the dismal infrastructure of nonpayment of salaries.

In India, ASHA health workers, comprise of women and had to do the monitoring of COVID19 cases in low-income neighborhoods without the PPE kits or other protective gear. In many states, ASHA workers were not even paid for months. They protested in many states demanding payment of dues.

Women’s and maternity health is one of the major areas of healthcare being neglected as services are scaled back and resources used to support women’s reproductive and sexual health are redirected to COVID-19 responses.

Thirdly, women have been facing increasing socio-economic challenges during the pandemic. Vulnerability to gender-based violence, physical and economic strain as primary caregivers, precarity due to informal employment, and lower-income are some of the factors which affect women disproportionately.

According to Kassova, part of this underrepresentation has to do with the framing of the crisis as a ‘war’, which tends to give more space for male representation.

The report recommends that in order to amplify women’s representation in COVID-19 stories, media houses can try to cover those topics which affect women more, such as healthcare, poverty, unemployment, and gender violence, and to cover them by emphasizing on human interest and local dimensions of a story. Further, women protagonists and experts such as nurses, paramedics, scientists, teachers, doctors, and so on should be given more of a voice. 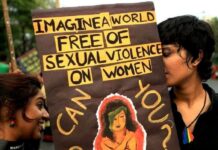